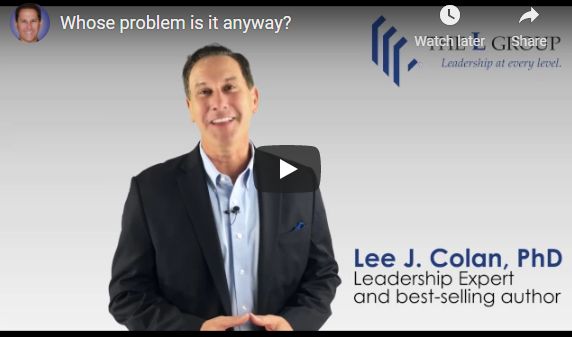 Whose Problem it is Anyway?

our teams. Let me just paint the picture and give a little background on that.

There’s a great book that I love titled, “Why Employees Don’t Do What They’re Supposed To Do and What To Do About I” by Ferdinand Fournies.

Fournies set out to answer the question, “What motivates employees?”  A question every leader wants to know the answer to.  So he conducted 15,000 interviews with managers.  When he looked at his initial findings he realized that he was asking the wrong question!  He needed to ask “Why don’t employees do what they’re supposed to do?”

He ultimately found 15 reasons why employees don’t do what they’re supposed to do.  You could guess most of them. For example, unclear expectations, lack of tools to perform the job or they thought they had a better way.  Nothing surprising, but here’s the great insight for me.  Thirteen out of those 15 reasons, about 86% of them, pertained to something the leader failed to do or didn’t do effectively.

So, the next time that you’re frustrated with a performance problem on your team, remember that leadership is an inside job.  We need to look at ourselves first because there’s an 85% chance that that performance problem is be rooted in something we could have been doing better or differently.

Ask yourself, “Whose problem is this anyway?”