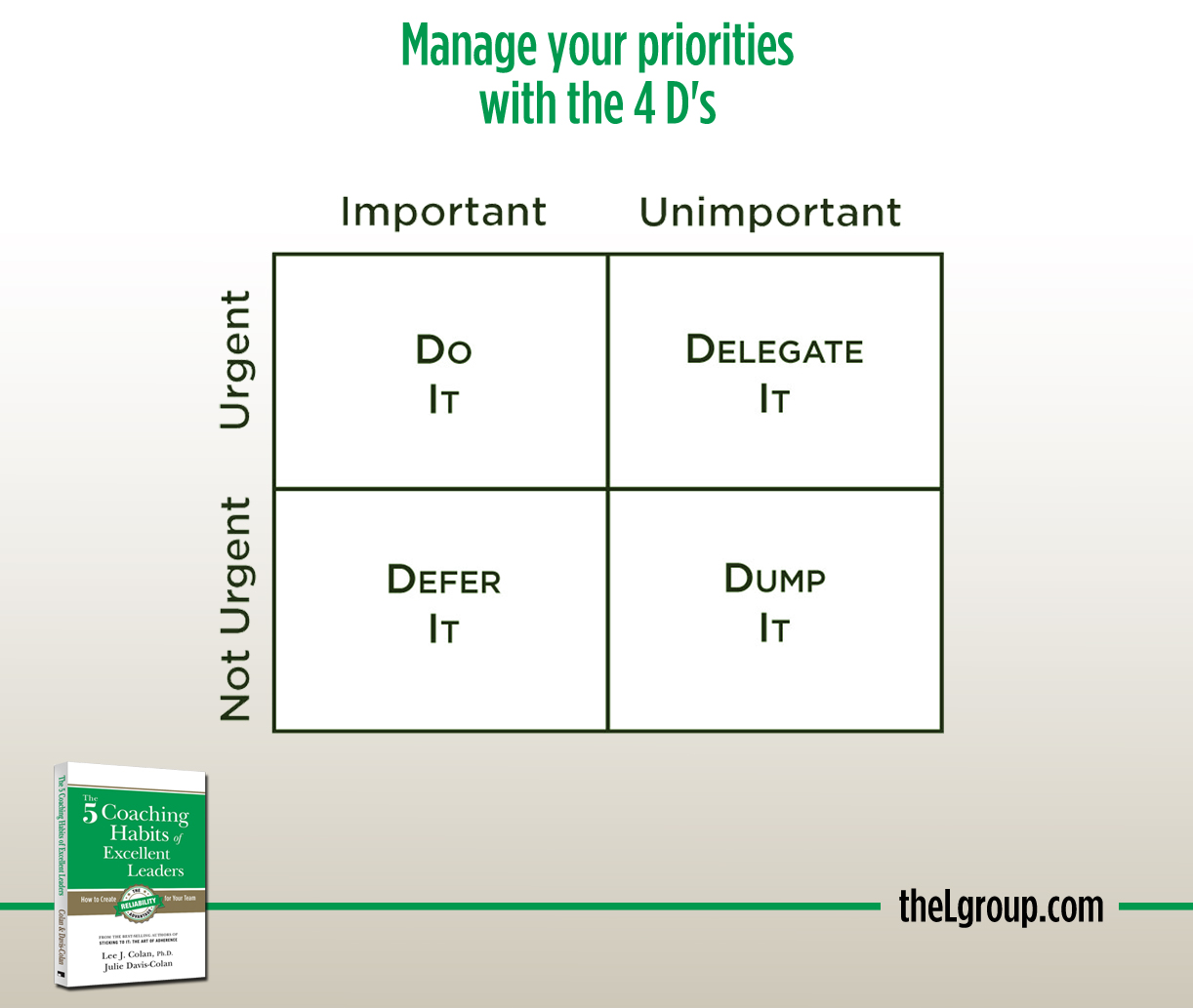 Using the 4 D’s to Prioritize

(This post is excerpted from The 5 Coaching Habits of Excellent Leaders.)

In addition to knowing yourself, having clarity about your priorities also predicts your personal reliability. The most important decision in business, and in life, is to decide what’s most important. So, as a request or an opportunity arises, ask yourself if this is a high priority for you. If it is a low priority for you today, what will really change to move it up to a high priority tomorrow? Ask for time to think about it and check your schedule. Reluctant or forced commitments, primarily those outside of work, typically result in lose-lose situations.

Our time, energy and money are precious resources. Once we spend them, we do not get them back to spend somewhere else. Therefore, saying “yes” to one task always means saying “no” to something else. We must say “no” to lower-value tasks in order to say “yes” to what is most important.

To be personally reliable, avoid non-committal answers like “maybe.” Be clear and direct. Redefine the term “polite” by taking the long view. You might be appeasing the other party by saying “yes” now, but you will ultimately disappoint them (and yourself) by overcommitting and possibly not delivering on your word. In today’s non-committal and less reliable world, “yes” has become the new “maybe.”

If your “yes” really means “yes,” you immediately vault into the top 5 percent of reliable people.

Dwight D. Eisenhower, the World War II general who went on to become a popular president of the United States, used what is now called the Eisenhower Method for setting priorities. After identifying the tasks confronting him, he drew a square and divided it into four quadrants. One axis was a scale of important to unimportant; the other was urgent to not urgent. Tasks that fell into the unimportant/not urgent quadrant were dropped.

When using this model, distinguish between “urgent” and “important” activities. Something that’s important is something that is beneficial and should be accomplished – if not right away, then eventually. Something that’s urgent is time sensitive but not necessarily crucial.

As you identify priorities, be realistic about what you can accomplish and be honest with yourself about what you truly want to achieve in your life and work. Where do you want to invest your precious resources?

Although important tasks are your top priorities, they will rarely appear urgent. Don’t be fooled into consistently working on tasks that appear urgent at the expense of your most important priority. This is particularly challenging in today’s world of instant information being pushed to your handheld device. Just because it appears in front of you does not mean it is important.

Bring the powerful tools from The 5 Coaching Habits of Excellent Leaders to your organization.