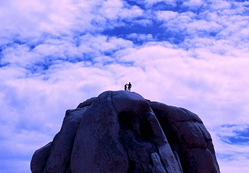 (This report is an excerpt from “7 Moments… That Define Excellent Leaders”.)

Although January is the month for creating new goals, February tells the truth about our stick to it-ness.

When I was a senior in high school, I participated in a mock congress with fellow seniors from throughout the state of Florida in a program called Boys’ State. It was a defining moment of perseverance for me. Let me explain.

During the course of the week at the state capital in Tallahassee, we learned about legislative issues, primarily by acting them out and holding mock elections for a variety of political offices. So I figured, “Hey, I’m only here once. Why not just go for it?” So I ran for a lower level position the second day, but lost to another student. No problem, I can take rejection. So I tried for a slightly higher office the next day, but I lost again. Now the stakes got higher – more prestigious offices on the line and a bruised ego that needed repair. I tried again but no victory. The next day again… nope! I have to win at some point, right? So one more time I submit my petition, make the rounds, and cast my vote. Votes finally came and I kept my perfect record: 0 wins, 5 losses.

Well, now we were down to the last day of the program and only the highest offices were left to be filled – the Governor’s cabinet. Here’s where the real campaigning kicks in. Pressing flesh, addressing the issues, oh yea, and making a speech in front of 1,000 of my fellow students (most of whom had won some type of office by now). With five defeats under my belt, there was nothing much left to lose.

With shaking knees and sweating palms, I made my first big speech (thank God for lecterns!) as I ran for Commissioner of Education. I decided to make perseverance one of my issues – it certainly seemed relevant, to me at least. All told, at least I left the week with a 1 and 5 record, but the one victory was the one that really counted. Even then, I knew enough to realize that, as Thomas Edison said, “Genius? Nothing! Sticking to it is the genius! … I’ve failed my way to success.”

Unfortunately, most people fail because they don’t stick to it long enough to succeed. For instance, every year on January 1st, people make new resolutions. It is a time to start fresh, to implement new plans for various areas of our lives. But we all know what happens… about 70 percent of all New Year’s resolutions last less than one month. Many last less than a week or even a day. It is not that our intentions are bad – it is just that most of us do not stick to it long enough to create a new habit – a subconscious behavior.

Sticking to it long enough to win is a common defining moment for many leaders and teams. These moments are so memorable because they often test our faith in ourselves and our teams.

Since we frequently cannot immediately see the tangible results of our leadership, we must trust that doing the right things will yield the desired results. We demonstrate this faith in everyday things, but somehow it seems more challenging with our teams.

For example, I took a lot of pictures of our children this Christmas as they opened their presents. I took some photos with my digital camera. Then I started to feel a bit nostalgic. So I grabbed my old 35mm camera (call me old fashioned!), put a brand new roll of unexposed film into it, focused on my children and clicked away. This film was now exposed to the images of my ever-so-happy children. But if I were to open up that camera and look at the film, it wouldn’t have looked like anything would have happened. I couldn’t see one picture that I just took. The film would look totally black.

I know and trust the images are all there. I just can’t see them with my eyes. The film has been exposed to the images of my children. The only problem is, I have not yet developed my film. Now, if I were to take that film to a developer, he would take me into a very dark, dark room, and he would slosh that film around in just the right solutions, and lo and behold, right before my very eyes, a miracle would occur. The images of my children would appear.

They were there all the time. I just couldn’t see it until I got it developed. But the reality is, the moment I snapped the picture, that image was imprinted onto that film.

The life of a leader works much the same way. Sometimes, it might feel like our teams are going through their own “dark room” experience before we finally see the positive results of our efforts. Trust that your efforts will yield the excellence you pursue.

Ray Kroc created such unparalleled success; most of us are unaware of how he really beat the odds and persevered his way to success.

During his entire life, Ray thrived on discovering just the right idea that would live on well after the man, himself. From a paper cup salesman, to real estate broker, piano player and, finally, milk shake mixer salesman, he always had an incredible amount of faith in himself!

At the young age of 52, Kroc’s biggest idea, McDonald’s, was about to emerge. However, Kroc had to muster enough courage in his new idea to mortgage his home and borrow lots of money to get it going. Oh! He wasn’t a picture of health, either. He’d been plagued by years of arthritis, diabetes, lost his bladder and most of his thyroid gland. But he never lost belief in himself. In fact, Ray Kroc was known to say, “The best is ahead of me,” according to those who knew him.

Today, the McDonald’s brand name is the 2nd most recognizable name in the world. Not bad for a 52-year-old with health problems, huge debts and tons of determination!

Ray Kroc was a simple man with a simple plan to achieve huge success. His secret sauce? Against all odds… persevere!

Take the 7 Moments Indicator to help your pursuit for leadership excellence.