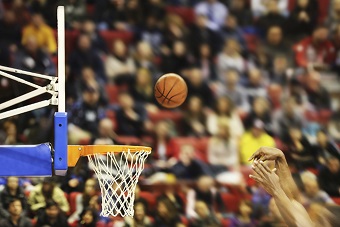 Know When to Quit

Swooosh!  The same sound I heard the last three shots as I caught the basketball after it glided through the net creating music to any shooters’ ears… swooosh.

As he launched his next shot, I quickly reminisce about the days when I would go half-speed and purposefully miss shots to keep my little guy in the game, trying to preserve his sense of accomplishment.    The sound of another swooosh yanks me back into reality:  9 – 1 now.  Today I am wishing my robust competitor would repay me with the same mercy.  After all doesn’t he realize he is still my “little buddy”….no such luck!

Then it hits me – not the basketball, but my limiting thinking.    Sometimes winners need to know when to quit.  No, not quit the game, but quit doing what’s not working.  I had been using the same playing strategy on my changing (growing) opponent.  If Dr. Phil was watching me he no doubt would ask me, “So, Lee, how’s that working for you?”

Well obviously down 9 – 1, not very well.   So rather than drive to the basket and try to go over the outstretched arms of my son who’s looking at me eye to eye, I relied on his natural instincts to jump high.  I stayed low and laid up a scoop shot underneath his arms.

A few moves like that and I made the score respectable… and yes a victory for me.  Well, let me redefine victory.  It is being able to walk off the court unassisted.  I will leave the victory based on the scoreboard to the mightier species of basketball players like my son.

As I gave my son a high five and walked off our driveway court (unassisted, let me remind you), I thought about how the inherently competitive nature of sports reveals many lessons. Sometimes as if to say “Gee, I should have had a V-8!” (as my cognitive light bulb goes off).  I thought, how many times I have been working harder and harder in my business.

The sense of frustration builds as there seems to be no correlation between my efforts and improved results (my business scoreboard).  I am all about sticking to your plans long enough to win, but winners also know when to quit.  They quit certain strategies and try new ones to get the results they want.

Our competition is always changing, and so are we.  In fact, our biggest competitor is often our own potential and our desire for the status quo.  Often, our goals are not as big as our hearts.

Don’t bask in the glory of victories gone by – your competition certainly isn’t (mine surely wasn’t!).  Old strengths might now be weaknesses, but taken-for-granted abilities might now be your greatest strength – experience, intuition, flexibility or even a few “trick shots” you have always had up your sleeve.

Know your competition, and know when to quit so you can start winning!

Learn more about other pretty good habits you can swap for really great ones in Winners ALWAYS Quit.

Read it today and win tomorrow! 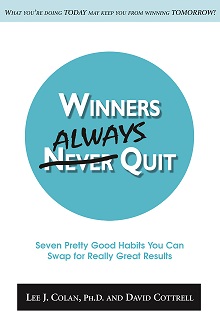