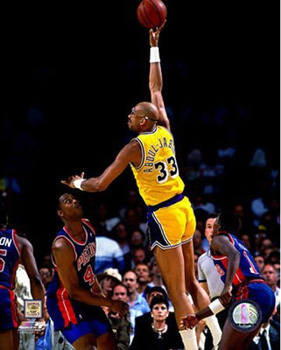 20 Things Boys Can Do to Become Men

I absolutely loved to play basketball as a youngster (and still do!). My basketball hero was Kareem Abdul-Jabbar. At 7’2″ his sky hook was art in motion.

He was not only a brilliant player on the court, but he is also brilliantly insightful.  A few years ago Abdul-Jabbar shares 20 Things Boys Can Do to Become Men.

The list is filled with wonderful nuggets for the young boy (or girl, for that matter) in your life.

Here are a few of my favorite excerpts:

1. Learn who you are as an individual.

Most of the time, given the choice, we seek the easiest path, the path of least resistance. We go along to get along. Sometimes that’s okay. But it’s those instances when you opt for a different path that can really define you as an individual.

The important thing is you make those decisions for yourself-not out of spite against authority figures, or because of peer pressure, or even out of fear of losing someone’s affection-but out of conviction of who you are and who you want to be.

2. Stand up for yourself and your beliefs.

British statesman Edmund Burke once said, “The only thing necessary for the triumph of evil is for good men to do nothing.” That’s one of my favorite quotes because it reminds me that it’s not enough to have lofty ideals and beliefs, you sometimes have to actually get off the couch and defend those beliefs.

This is especially hard when you’re hanging with your friends and they all express an opinion that is the opposite of yours. Because you’re outnumbered, it’s easy for them to ridicule your opinion. Be strong. Defend your opinions and beliefs.  You’ll feel proud that you took a stand. Those moments you do nothing will haunt you for a long time.

When you’re a kid being told to firmly shake hands, keep your elbows off the table, or ask guests if they’d like a drink, it all seems like a load of dumb and arbitrary rules. Some of it is. But part of becoming a man is the realization that it doesn’t matter whether or not the rules of manners make sense. What matters is the effect of following these rules: people appreciate the effort and respect shown them. In turn, they will show you respect.

12. Never, never do something on a dare.

“I dare you” may be the three most dangerous words in the language for kids. The challenge to prove yourself to others is very tempting, especially since the alternative seems to be showing yourself to be a coward. But that’s not really the case. The person who dares you is counting on your not being strong or smart enough to see this challenge as the empty, laughable joke it is.

The person who refuses a dare displays intelligence, courage, and independence. And that’s what daring someone is trying to rob them of.

One main difference between a boy and a man is that boys talk about what they want to do and men actually do those things. Another difference is that men have less time to accomplish more.

In order to do all the things they want, they have to be organized. They keep a calendar (the one in your smart phone is handy), they make a to-do list, and they don’t put off doing things until later.

Making up your own mind doesn’t mean “going with your gut,” “listening to your heart,” or any other such clichés, however. That’s the lazy man’s way of avoiding the work that comes with developing an informed opinion. Want to express an opinion about the election, the death penalty, or gay marriage?

First, do your research. Don’t rely on biased sources. Your goal is to find the truth, not just confirm an opinion you already held. Every time you express an uninformed opinion, others will dismiss you as a child, someone who can only parrot others’ opinions. A man knows how to educate himself in pursuit of truth.

Thank you, Kareem, for being an inspiration on and off the court!